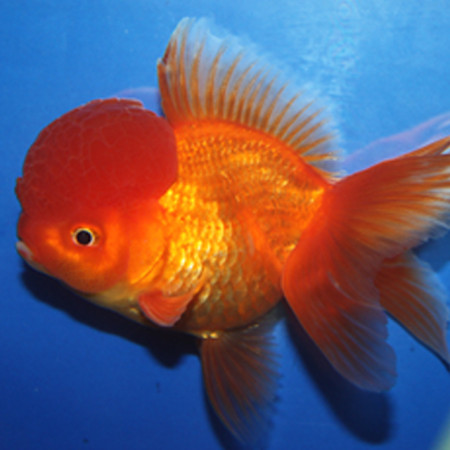 The Oranda Goldfish is the most popular ornamental fish among the aquarium enthusiasts due to their egg shaped body and brilliant coloration. It belongs to the family Cyprinidae under order Cypriniformes of class Actinopterygii. Oranda goldfish was originated in the late 1500s by crossing between a lionhead and Japanese Fantail goldfish. It is favored for its hood or wen on the top of its head, egg shaped body, shimmering scales, a long flowing split caudal fin and a wide range of colors including orange, red, black, and blue, bronze, chocolate, bi-color and calico color combinations which make it more beautiful and attractive among the ornamental fish keepers. The Chinese refer to it as the “flower of the water” while in Japan it is called ‘Oranda Shishigashiri.

Overview
The Oranda Goldfish has more rounded or egg-shaped body with split caudal fin. It has metallic or matte scales with a wide variety of colors including orange, red, red and white, red and black, black, blue, chocolate, bronze, white or silver, black and white (panda-colored), red-black and white (tricolor), and calico colors. On the basis of color variations, Red, Red White, Redcap, Telescope, Panda are very popular among the ornamental aquarium enthusiasts. Redcap ornanda has totally white body with red circle on their head directly above the eyes which make it one of the most popular choices among pet fish lovers. Red Oranda is a single red or orange color fish with brilliant high gloss scales while Calico Oranda has a multicolored body with a light blue background and patches of either orange, yellow, violet, red or brown or any combination which make it more attractive. Panda can be recognized by its white and black coloration and the telescope ornada is characterized by large eyes with long telescope or cone like stalk on the side of its head. Ornanda goldfish is an omnivorous and it generally accepts all kinds of fresh or frozen foods such as brine shrimp, blood worms, krill, Daphnia, or Tubifex. It also takes peas, spinach, lettuce and zucchini bits, plankton, bits of beef heart, glass worms etc. The mature female can produce up to 10,000 eggs. It grows up to 17.78 cm in length and can live up to 15 years or more with proper care.

Feeding
Ornanda goldfish is an omnivorous and it generally accepts all kinds of fresh or frozen foods such as brine shrimp, blood worms, krill, Daphnia, or Tubifex. It also takes peas, spinach, lettuce and zucchini bits. Frozen vegetable diets, plankton, bits of beef heart, glass worms are also acceptable. To keep a good balance gives them a high quality flake food every day. Feed should be offered 2- 3 times daily.

Housing
Oranda goldfish is one of the most popular and highly decorative freshwater ornamental fish. It requires at least 10 gallons tank with lots of swimming space. The tank should have gravel or driftwood substrate which provide natural and comfortable environment. The gravels or driftwood should be smooth with no protruding points or edges. Aquarium plants should be used to décor your aquarium. In this case live or artificial plants make a good substitute. The ammonia should always be 0 mg/l and the nitrate should be below 20mg/l. To keep your fish healthy tank water should be replaced on a regular basis. In this case at least 25 – 50% of the tank water should be replaced every other week, especially if the tank is densely stocked. Good filtration especially biological filtration is required for maintaining the water quality of the aquarium. Because this filtration system removes detritus, excess foods and wastes which help to keep the tank clean and maintain the general health of the fish in aquarium. Snails can also be added as they reduce the algae in the tank, helping to keep it clean. Oranda goldfish is peaceful community fish and it can be kept with other goldfish varieties including ranchu, lionhead, moors, pearlscales and many more. Other ideal tank mates include mollys, guppies and smaller types of danios, Plecos, and some scavenger Catfish. It should not be kept them with faster swimming breeds like the comet, shubunkin or common goldfish due to competition for foods.

Breeding
Oranda goldfish is an egg layer and it can spawn readily in captive condition with proper care. In wild condition it spawns during spring season. It is very social and peaceful fish which likely to breed in groups as small as five or more individuals. Breeding tank should have water chemistry with pH of 6.0-8.0, hardness of 4-19 dGH and temperature of 65.0 to 72.0° F (18.3 to 22.2° C). Before spawning the parent should be conditioned with high protein food such as live brine shrimp and worms. Partial water changes of up to about 20% per day should be done to maintain the good water quality in aquarium. The sexually mature female can produce up to 10,00 0 eggs which adhere by sticky threads to the plants or spawn mop and spawning can last two or three hours. After spawning the parents should be removed from breeding tank to prevent them from eating the eggs. The fertilized eggs hatch in 4 to 7 days. The free swimming fry should be fed with newly hatched goldfish specialty fry foods until they become big enough to eat flake or brine shrimp.

Availability
The classic feature of an Oranda goldfish is the colorful hood or cap that gradually develops on the fish’s head as it grows. It is very popular among the aquarium enthusiasts due to their wide variety colors and brilliant egg shaped body. It is readily available in fish stores and online vendor with reasonable prices.

Be the first to review “Oranda” Cancel reply

Comet
Brought to you by WisdmLabs: Expert WordPress Plugin Developer