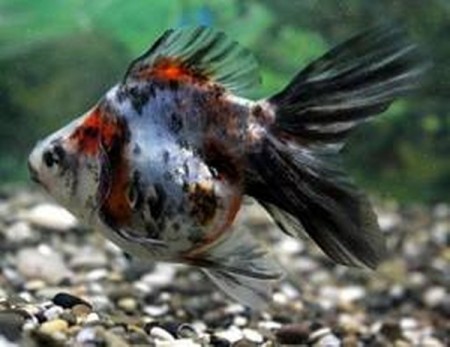 The fantail goldfish is a very popular ornamental fish among the aquarists due to their beautiful tail and brilliant colors. It belongs to the family Cyprinidae under order Cypriniformes of class Actinopterygii. It can survive and compete successfully with other goldfish in ponds and aquariums. It can easily breed in captive condition and it is an ideal fancy goldfish for beginners. It was originated in the early 1400s, during the Ming Dynasty of China. The fantail is the most common recent ancestor of all forms of fancy goldfish. It has variety of colors with an egg-shaped body and high dorsal and a quadruple caudal fin which make it an appearance of deliciously floating flames when it swims around the tank.

Overview
The fantail goldfish has a rounded, egg-like body with wide head and split caudal fin. It has many colors and color patterns including orange, red and white, black and canary yellow, black and gold, calico and a blackish-bronze. Body is covered with three different types of scale such as metallic, a solid reddish orange, nacreous which is speckled and regular matt which is a whitish in color. Fantail has normal or telescope eyes which do not develop until the fish is 6 months old. Fins are less developed and the anal and caudal fins are well divided into two matching halves which give the tail a triangle shape when it is viewed from the above. On the basis of color patterns, there are several varieties such as red, red white, redcap, calico, and telescope or Mix telescope fantail gold fish. Among them Calico Fantail and Red and white fantail goldfish are very popular among the aquarium enthusiasts. The Calico Fantail shows off an exciting palette of red, orange and black markings against a field of pearl white. This color variation has an artistic, painted quality that makes each Calico Fantail a unique piece of living art. Red and white fantail goldfish is more beautiful with shades of pearl white and brilliant orange. It is omnivorous and in wild condition it mainly feeds on plants, insects such as mosquito larvae, small crustaceans, zooplankton, benthic invertebrates and detritus. It grows up to 15.24 cm in length and can live up to 20 years or more.

Housing
Fantail goldfish is a hardy fish and it is very popular among the aquarium enthusiasts. It requires at least 10 gallons tank or larger is recommended. The tank should have lots of swimming space with aquatic plants such as java plants. It is usually very hardy fish and it can live in temperatures which range from 65.0 to 72.0° F (18.3 to 22.2° C). It prefers good water chemistry with pH and hardness which ranges from 6.5 to 7.5 and 6-16 dGH respectively. The ammonia should always be 0 and the nitrate should be below 20mg/l. A regular weekly water change is strongly recommended to keep your fish healthy. Good filtration especially biological filtration is required for maintaining the water quality of the aquarium. Because this filtration system removes detritus, excess foods and wastes which help to keep the tank clean and maintain the general health of the fish in aquarium. Snails can be added as they reduce the algae in the tank that helps to keep the tank clean. The tank should be decorated with gravel substrate that helps to create a natural and comfortable environment for your fish. Fantails can be kept with black moors, pandas, butterflies, pearlscales, Ryukin, Oranda, Tosakin, Lionhead, Ranchu or Veiltail. It should not be kept with faster swimming torpedo-shaped goldfish like shubunkins, comet or common goldfish.

Breeding
Fantail Goldfish is an egg layer and it can easily breed in captive condition with right conditions. It is very social fish which likely to breed in groups as small as five individuals or more. In wild it spawns during the spring season. The breeding tank should have mimic condition that is found in nature. The tank should also have lush environment with solid surfaces for the spawning process. In this case bushy, oxygenating plants, such as Anacharis work well. Arificial plants or fibrous spawning mops can also be used. To enhance the breeding process adults can be conditioned with high quality protein foods such as pellets, Daphnia, brine shrimp and bloodworms. Breeding tank needs partial water changes of up to about 20 % per day. Spawning can last two or three hours and the mature female can produce up to 10,000 eggs which adhere by sticky threads to the plants or spawn mop. After spawning the parents must be removed from breeding tank to prevent them from eating the eggs. The fertilized eggs hatch in 4 to 7 days and the free swimming fry can be fed with newly hatched goldfish specialty fry foods until they become big enough to eat flake or brine shrimp. The free swimming fry are a dark brown or black in color and they gain adult color after several months.

Be the first to review “Fantail” Cancel reply

Oranda
Brought to you by WisdmLabs: Expert WordPress Plugin Developer