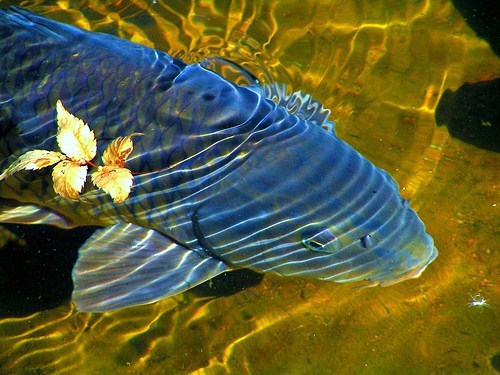 Introduction
The black carp (Mylopharyngodon piceus) is a freshwater ray finned fish which is also known as snail carp, Chinese black carp, black amur, Chinese roach, black Chinese roach etc. It is culturally important and is used in polyculture together with bighead, silver and grass carps in China for over a thousand years. This is a valued food fish in its native China. The black carp is recently introduced from Asia in other continents, mostly accidental with other 3 Chinese species such as grass carp, silver carp or bighead carp. Black carp was originally entered the United States in the early 1970s as a contaminant in imported grass carp stocks in aquaculture facilities and farm ponds. The second introduction of black carp into the United States occurred in the early 1980s for control of yellow grub (Clinostomum complanatum or C. marginatum) in fish culture ponds. The species was also imported by a Mississippi fish farmer during the early 1980s and by a fish farm operation in Missouri during the period of 1986-1988. In United States it is also known as ‘Asian carp’. In Israeli reservoirs, the black carp was introduced in the 1970s. Black carp are used as a biological control in many countries because they eat infected snails in ponds. It is a freshwater demersal and potamodromous species that prefers to inhabits 5-30 m depth ranges with pH range of 7.5 – 8.5 and temperature of 78-86 0F(26-30°C).

Background
The black carp (Mylopharyngodon piceus) was described by Richardson in 1846. It belongs to the family Cyprinidae under order Cypriniformes of class Actinopterygii. Its genus name ‘Mylopharyngodon’ is derived from Greek word ‘mylo’ meaning ‘mill’ plus the Greek word ‘pharynx’ meaning ‘throat’ and the Greek word ‘odous’ meaning ‘teeth’. At present it is not listed on IUCN Red Data List as threatened species.

Physical deccription
The black carp has stout, elongate and cylindrical to slightly compressed body with a short and relatively deep caudal peduncle. Body coloration is somewhat variable. Typically body is dark brown or blue-grey to black in color. In some black carp the ventral part of the body is almost white in color particularly beneath the head region and all fins are blackish grey. Body is covered with relatively large cycloid scale with black tips giving it the appearance of cross-hatching. Lateral line is complete with 39-46 scales. Head is relatively short with moderate size eye and slightly rounded snout. Mouth is relatively small to moderate in size and terminal with no barbells. Dorsal fin is short which is located slightly anterior to above the pelvic fin origin. The anal fin is located near to the base of the caudal fin and the caudal fin is large and forked. Dorsal fin contains 7-9 soft rays while anal fin bears 8-10 soft rays. It has heavy pharyngeal arches and single row of 4-5 large molariform teeth on each of the two arches which are adapted to crush mollusks shell. Young black carp are difficult to distinguish from young grass carp while adults may be distinguished externally by the color and the more cylindrical form of the body and internally by the pharyngeal teeth.

Feeding
It is carnivorous and it generally feeds at 20% of their body weight per day. Larvae and small juveniles feed entirely on small invertebrate such as zooplankton and aquatic insect. Larger juveniles and adults are bottom feeders that predominantly prey on snails and bivalve mollusks. They also consume crayfish and other benthic invertebrates. A four years old black carp is able to eat 3 to 4 pounds of mussels per day.

Sexing
It is difficult to make differences between male and female black carp at young stage. Generally females are usually heavier than that of males of the same age. During the spawning season, the male develops breeding or nuptial tubercles on the head and dorsal fins. Sometimes it is also seen inter-orbital region, pectoral fin rays, operculum and sides of the body. Tubercles are absent in females. The fish grows up to 180 cm in length and 35 kg in weight. It can live up to 15 years or more.

Breeding
The black carp breeds in natural open waters where sufficient current is present during flood phase. In native range, spawning begins when water temperatures increase to 78-86 0F (26-300C), water levels begin to rise and mollusks are readily available. Females are capable of producing between 1,29, 000 and 11,80,000 eggs per year into flowing water. Spawning occurs in late spring and summer in turbulent waters and at that time the pre-spawning adults migrate upstream and lays eggs. The eggs are pelagic or semi pelagic. After fertilization, the eggs become semiboyant. The eggs hatch in 1 to 2 days, depending on water temperatures and the yolk sac is absorbed in 6 to 8 days. If the river flow is blocked or if available river stretches are too short, eggs cannot drift for long enough and fail to develop. Larvae migrate into floodplain lakes and channels with little or no current. Larvae feed on zooplankton, then on ostracods and aquatic insects. At about 120 mm standard length, juveniles start to feed on small snails and clams. Larger juveniles and adults feed almost entirely on mollusks. They become sexually mature at 4 to 6 years after which they migrate back to their spawning grounds.

Ecological role
The black carp is commercially important species in its native range. It is one of the most important species for aquaculture in many countries. It grows up to 3 kg in weight in one year. The black carp is used for biological control of freshwater mollusks in various parts of the World. Fish-borne zoonotic trematodes are a public health concern in many countries and some snails are the first intermediate host of zoonotic tremadotes. Juvenile black carp (100 – 200g in weight) should be used to control this snail because this size primarily preys on intermediate hosts of fish borne zonotic trematodes. In different parts of the world it is used to control Pomacea canaliculata which damages rice plants. In the United States, the trematodes, Bolbophorus confusus and Centrocestus formosanus cause serious loses in catfish culture and black carp is successfully to control the first intermediate host snails (Planorbella trivolvis) of these trematodes species. In Israel, Black carp are also used in reservoirs and canals to control Melanoides tuberculata and Physella acuta which can block filters and pipes and thus reducing water flow. Besides these, black carp together with other carp act as biological controls and improve water quality. They also have synergistic effects which may beneficially affect the growth of other species present in the same water body.

Ecological impacts
Several countries reported adverse ecological impacts after introduction of black carp. At all life stages, black carp competes for food with native species. It has a negative impact on the native aquatic communities by feeding and reducing populations of native mussels and snails. It also negatively affects threatened and endangered fish, turtles and birds that rely on mollusks as a food source.

Want to join the discussion?
Feel free to contribute!