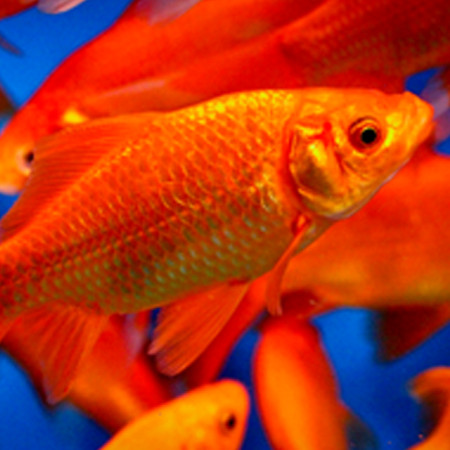 The Comet Goldfish is one of the most beautiful ornamental aquarium fish which is also known as Comet-tail Goldfish or Pond Comet. It can be distinguished from the common goldfish by its long, single and deeply forked caudal fin. It belongs to the family Cyprinidae under order Cypriniformes of class Actinopterygii. In the early 19th century it was developed in the United States from the common goldfish by Hugo Mulertt. It is now one of the best known and most widespread fish in the aquarium hobby.

Overview
The Comet Goldfish has an elongated and flat body with short and wide head. It has many colors and color patterns including orange, red, white or red and white color combination. Occasionally it is available with nacreous or pearly scales giving them a variegated color. The caudal fin is long and deeply forked and generally stands fully erect. On the basis of color variation, there are several varieties of comet goldfish such as Red, Sarasa, Yellow or Black. Among them the most popular comet variety is known as the Sarasa. It is characterized by long flowing fins and a red and white coloration that holds a resemblance to a koi color pattern called ‘Kohaku.’ The comet goldfish is an omnivorous and in wild it feeds on plant matter, algae, insects and small crustaceans. In captive condition it generally eats all kinds of fresh or live foods such as brine shrimp, blood worms, Daphnia or Tubifex worms, frozen and flake foods. It also accepts plenty of parboiled fresh vegetables such as peas, zucchini, cucumber, broccoli, romaine lettuce and carrots. The mature female can produce up to 10,00 0 eggs. It grows up to 10.16 cm in length and can live up to 14 years or more with proper care.

Feeding
The comet goldfish is an omnivorous and in wild it feeds on plant matter, algae, insects and small crustaceans. In captive condition it generally eats all kinds of fresh or live foods such as brine shrimp, blood worms, Daphnia or Tubifex worms, frozen and flake foods. It also accepts plenty of parboiled fresh vegetables such as peas, zucchini, cucumber, broccoli, romaine lettuce and carrots. To keep a good balance gives them a high quality flake food every day. Feed should be offered 2-3 times daily.

Housing
The comet goldfish is hardy and easy to care for. It requires at least 15 gallons tank with lots of swimming space. The tank should have gravel or driftwood substrate which provide natural and comfortable environment. The gravels or driftwood should be smooth with no protruding points or edges. Aquarium plants should be used to décor your aquarium. In this case live or artificial plants make a good substitute. The ammonia should always be 0 mg/l and the nitrate should be below 20mg/l. To keep your fish healthy tank water should be replaced on a regular basis. In this case at least 25 – 50% of the tank water should be replaced every other week, especially if the tank is densely stocked. Good filtration especially biological filtration is required for maintaining the water quality of the aquarium. Because this filtration system removes detritus, excess foods and wastes which help to keep the tank clean and maintain the general health of the fish in aquarium. Snails can also be added as they reduce the algae in the tank, helping to keep it clean. It can be kept with other Pond Comets, Shubunkins, Koi, and Butterfly Koi. It should not be kept with slower twin-tails like Ornanda, Black Moors, Veiltail, Telescope Eye or Ryukin goldfish due to competition for food.

Breeding
The Comet Goldfish is egg layer that spawns readily in captive condition with proper care. The breeding tank should have a lush environment with solid surfaces for the spawning process. In this case bushy, oxygenating plants, such as Anacharis works well. Atificial plants or fibrous spawning mops can also be used. In wild condition the comet goldfish spawns during spring season. It is very social and peaceful fish which likely to breed in groups as small as five or more individuals. Breeding tank should have water chemistry with pH of 6.0-8.0, hardness of 4-19 dGH and temperature of 65.0 to 72.0° F (18.3 to 22.2° C). Before spawning the parent should be conditioned with high protein food such as live brine shrimp and worms. Partial water changes of up to about 20% per day should be done to maintain the good water quality in aquarium. The sexually mature female can produce up to 10,00 0 eggs which adhere by sticky threads to the plants or spawn mop and spawning can last two or three hours. After spawning the parents should be removed from breeding tank to prevent them from eating the eggs. The fertilized eggs hatch in 4 to 7 days. After 24-48 hours, the fry become free-swimming. At this time they can be fed with infusoria, baby brine shrimp or commercially available fry foods.

Sexing
It is difficult to make differences between the male and female at young stage. Generally the male is smaller and more slender than the female. During the spawning season the male has breeding tubercles in gill covers and head which are seen as white prickles while sexually mature female has a fatter appearance when she bears eggs in her belly.

Availability
The Comet is now the world’s most common goldfish variety. It is a very hardy and is excellent for the beginner aquarists. It is characterized with long slender body and long single caudal fin with varieties color pattern which make it more attractive among the ornamental fish keepers. It is inexpensive and readily available in fish stores and online vendor.

Be the first to review “Comet” Cancel reply